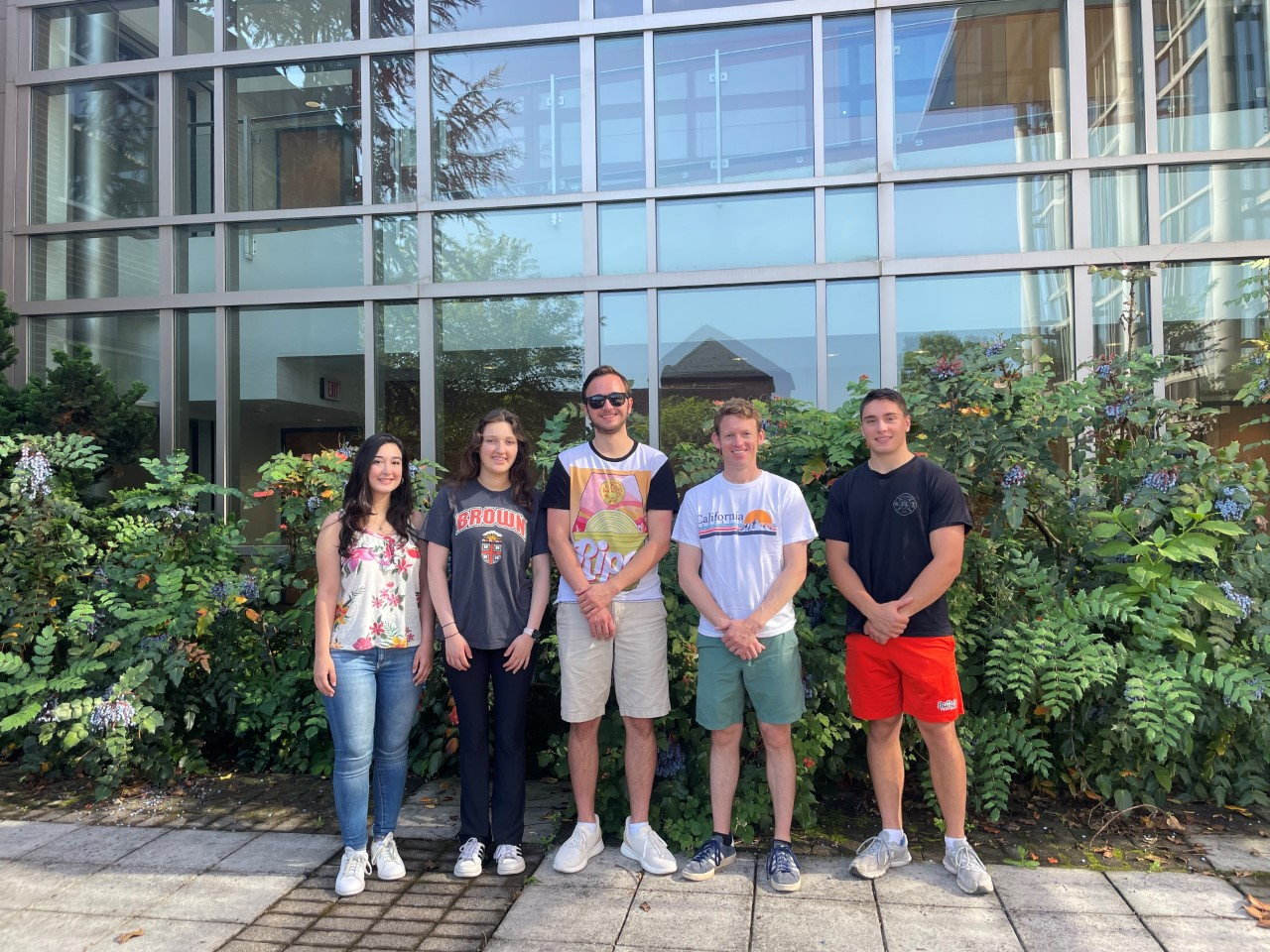 In a collaboration with Dr. Vince Venditto of the University of Kentucky College of Pharmacy, we are working to synthesize a library of lipids based on cyanuric chloride. Lipids have a polar, hydrophilic head group and a hydrophobic tail. Our synthetic lipids are made by using cyanuric chloride (a good electrophile!) as a linker to attach the polar head and hydrophobic tail together. Cyanuric chloride (pictured below) has three places where other molecules can be attached replacing the chlorines and providing us with three opportunities to add head and tail groups, all which can be controlled with temperature! Our goal is to attach the headgroup, attach a precursor to the tail, and then attach the variable tail groups. With lipids with variable hydrophobic tails, Dr. Venditto will be able to study the relationship tail length has on the lipids’ ability to form vesicles that deliver information (such as DNA, RNA, proteins, etc) to cells.

Now we will introduce the team…

Emily is a rising junior majoring in BMB and Spanish. She is currently working on the lipid synthesis project where her lipids will have two of the same head group and two variable hydrocarbon chains (the tails!). Checkout the picture of her desired lipid below!

On a typical day in the lab, Emily is happy when she can filter her product! 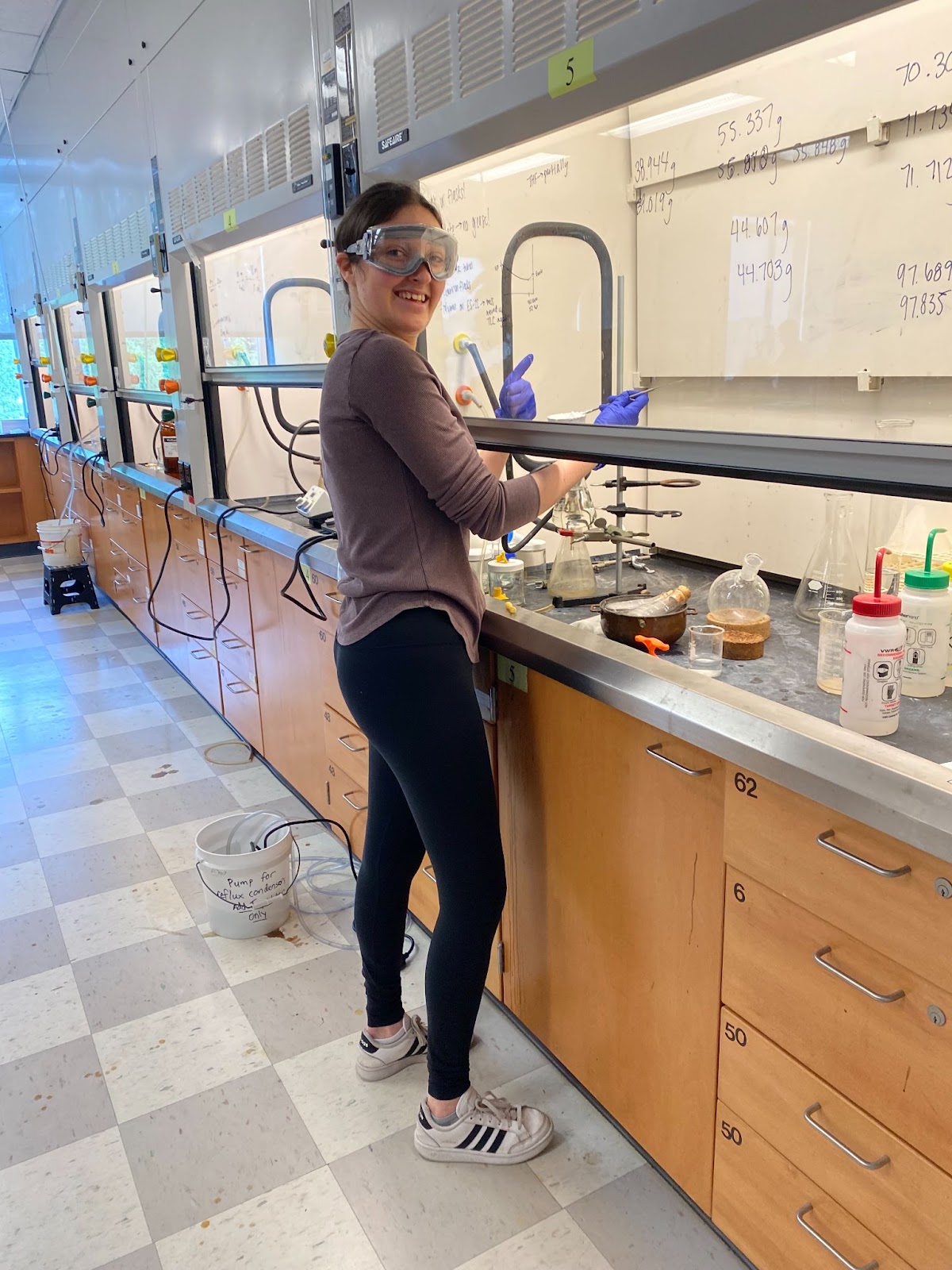 But is sad when she has to do Scifinder search 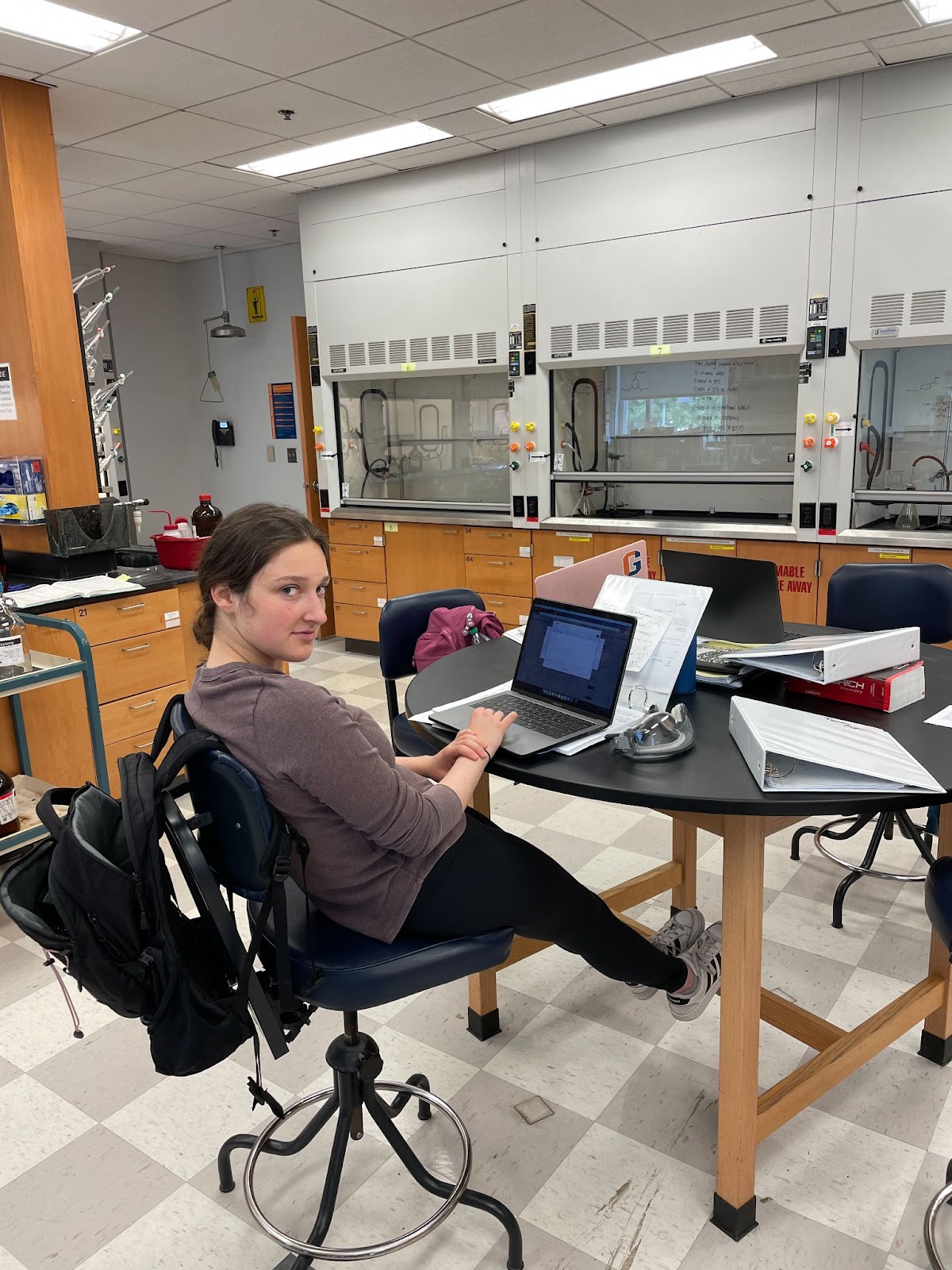 Tommy is a rising senior and is part of the BMB major. His project is similar to that of Emily’s and entails a series of reactions to add just one head group onto cyanuric chloride along with two variable hydrocarbon chains at the remaining positions. His favorite activity during lab is taking NMR to chill with Dr. Buettner and her lab (shoutout to her amazing banana muffins). His least favorite activity is spending an infinite amount of time rotovapping (Images below). 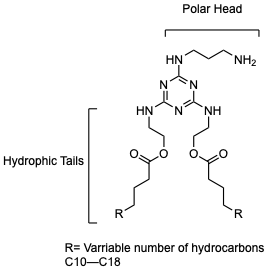 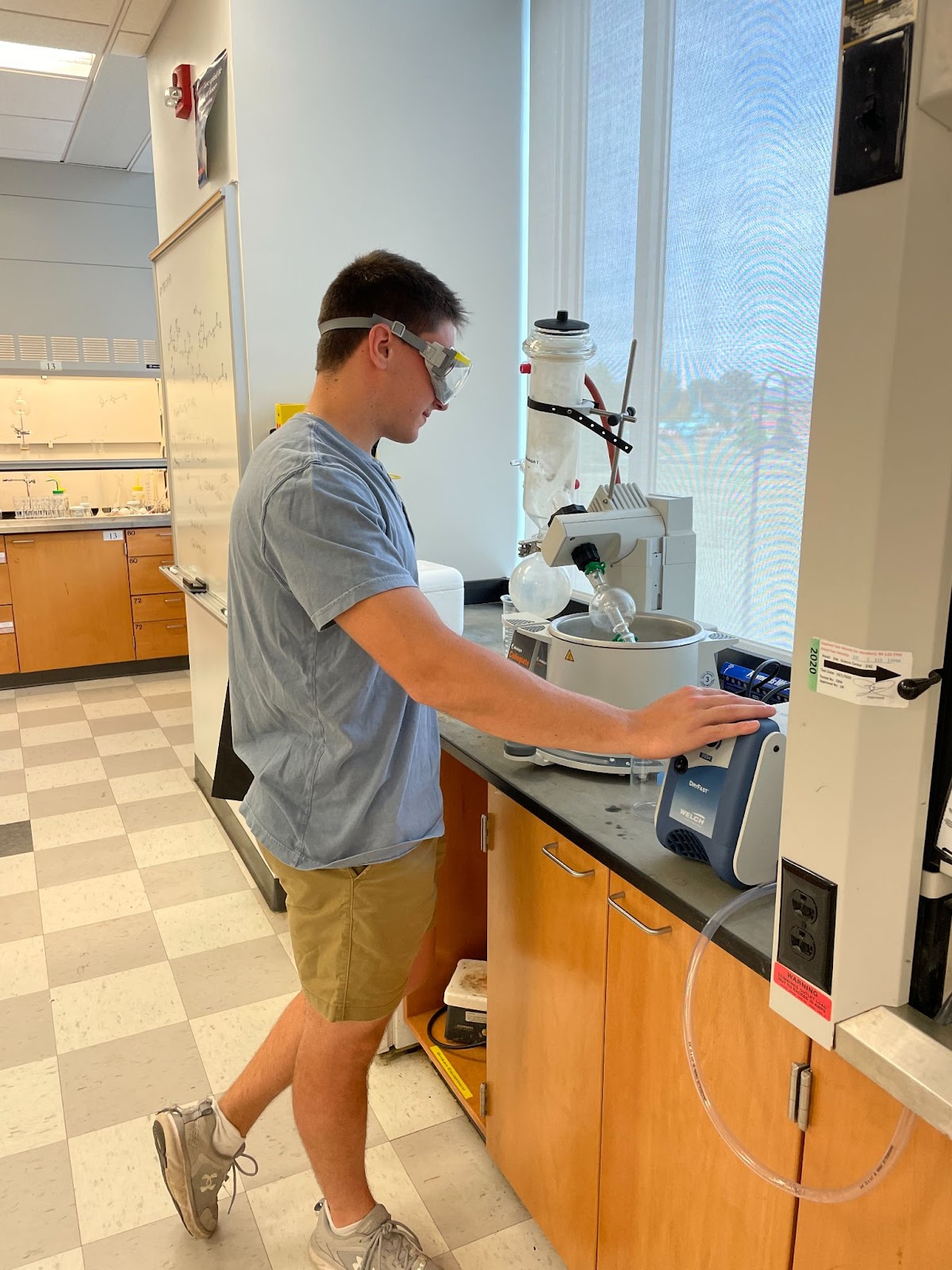 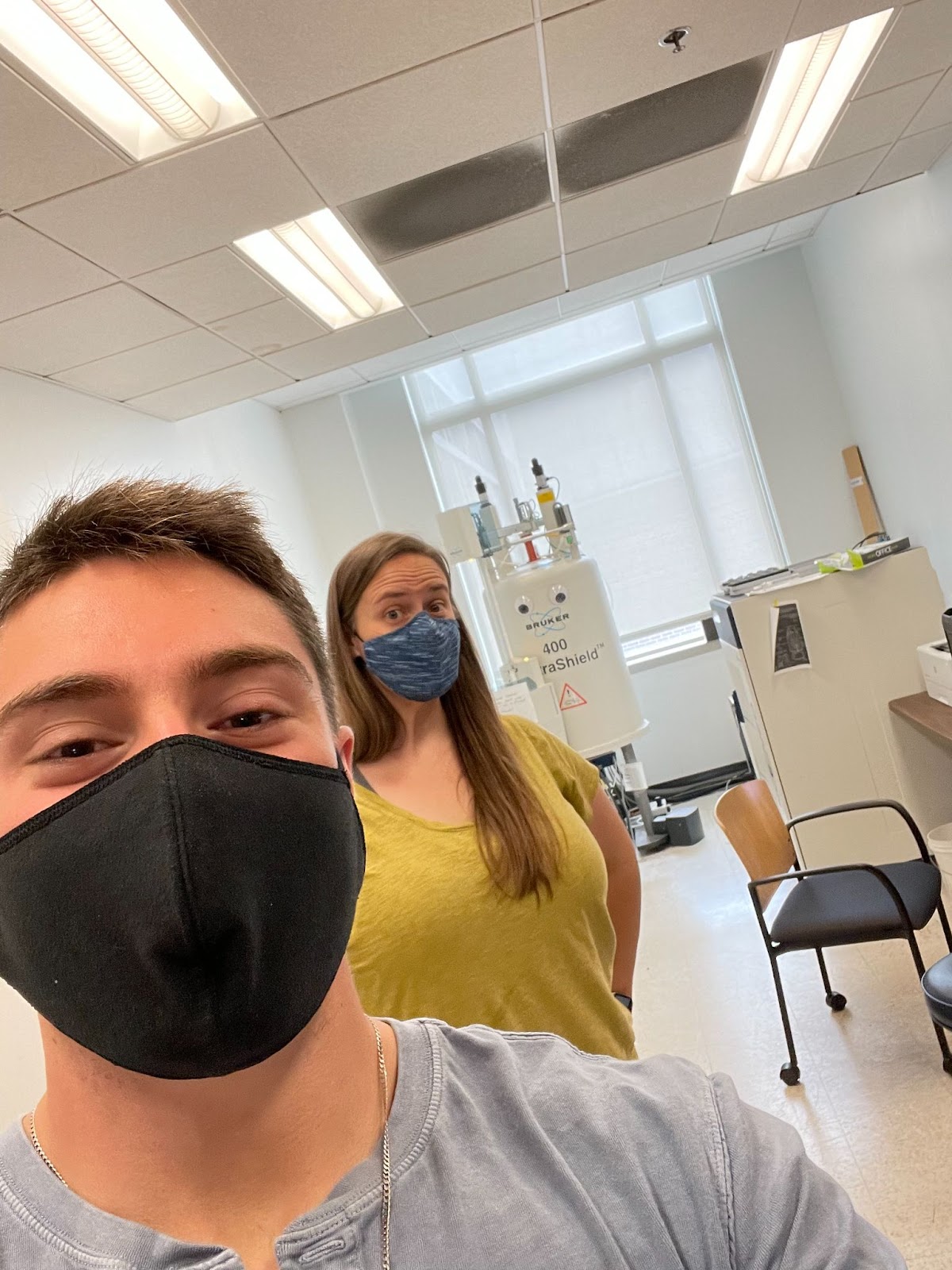 Figure 5.   Tommy rotovapping for the 100th time (left image). Tommy and Dr. Buettner having a grand time in the NMR room (right image).

This iron catalyst project has been in the works for over a decade at this point and is a staple of Professor Funk’s research. The general idea of this catalyst is to be cheap, environmentally safe, and useful in several different reactions. We (Cole and Nicolle) are currently working on two separate projects within this project but with the overall goal to test out the extent of the compound’s ability to be a catalyst in oxidation reactions (essentially reactions where electrons are transferred from one compound to another).

Figure 6: The catalytic mechanism of the iron catalyst (from C going clockwise around).

We are testing out different kinds of alcohols (primary, secondary, and diols) by oxidizing them through this mechanism and trying to get as high of purity and yield as possible for their corresponding ketones or aldehydes. With this introduction out of the way, it’s time to introduce ourselves:

Cole is a rising sophomore majoring in Chemistry and German Studies. He is currently working on finding the most efficient work-up conditions which will lead to the best yields and purities of the products. The main reaction he has been working on is shown in Figure 6:

Figure 7: The oxidation reaction of 4-phenylbutan-2-ol.

On a typical day in the lab, Cole is happy when he can purify his product!

Nicolle is a rising junior majoring in Chemistry. Her project involves determining if the (tetraphenylcyclopentadienone)iron tricarbonyl catalyst will selectively oxidize secondary alcohols over primary alcohols. She is exploring competitive reactions between a variety of primary and secondary alcohols using two different hydrogen acceptors: acetone and furfural. One of the reactions is shown in Figure 7.

On a typical day, Nicolle is sad when her TLC plate falls on her eluent.

But is happy to use the GC to obtain results from her reflux reactions! 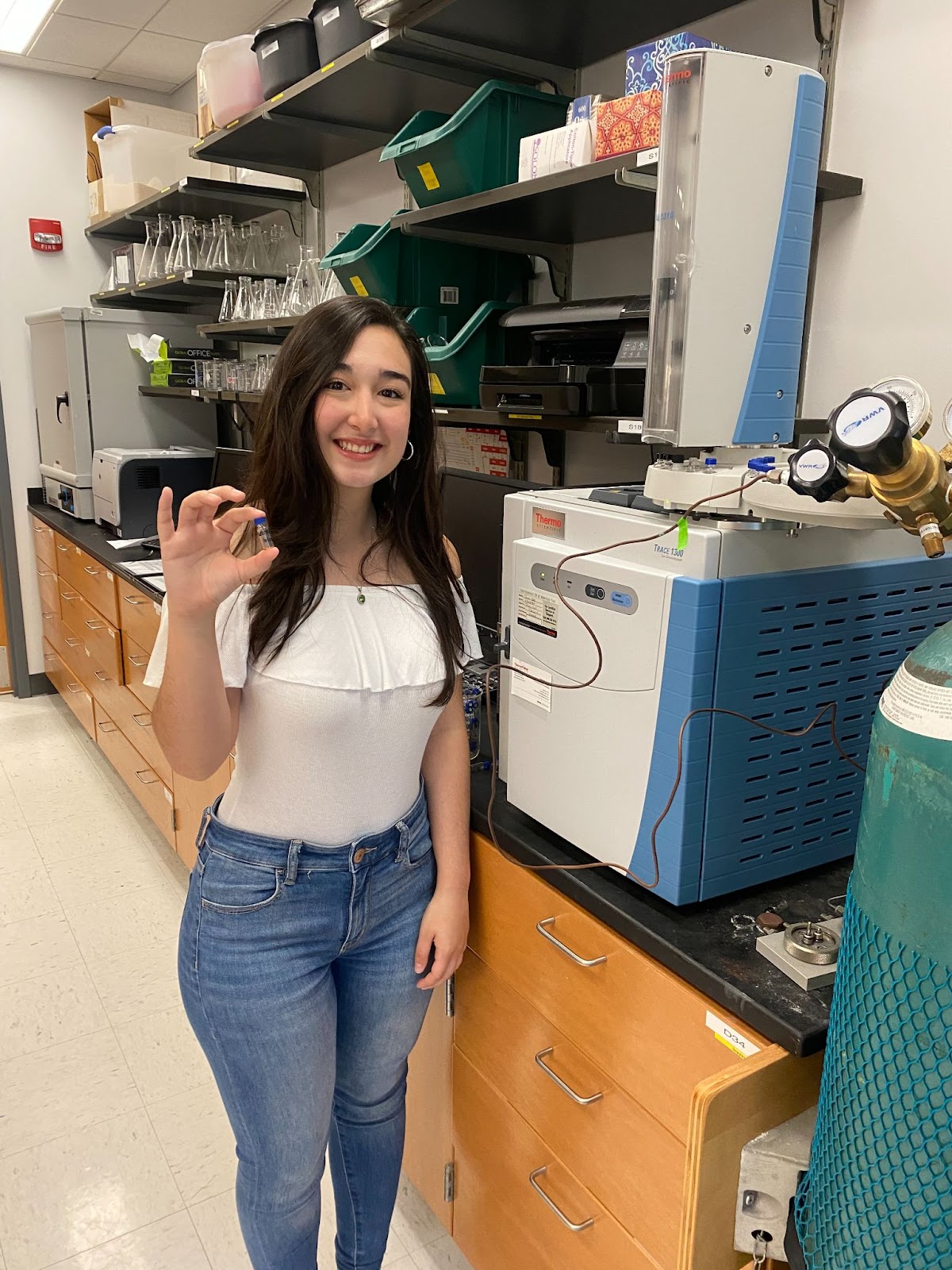 Prof. Funk is a Gettysburg College graduate (‘00) and is about to begin his 6th year as the chair of the Chemistry Department. He loves making molecules and engaging students in the process, too. This year’s projects are exciting to him because they connect chemical synthesis to two other areas of interest: environmental sustainability and pharmaceuticals.

He is sad and frustrated when he is stuck in his office doing administrative tasks.

And he’s happy when he finally gets into the lab to do some science! 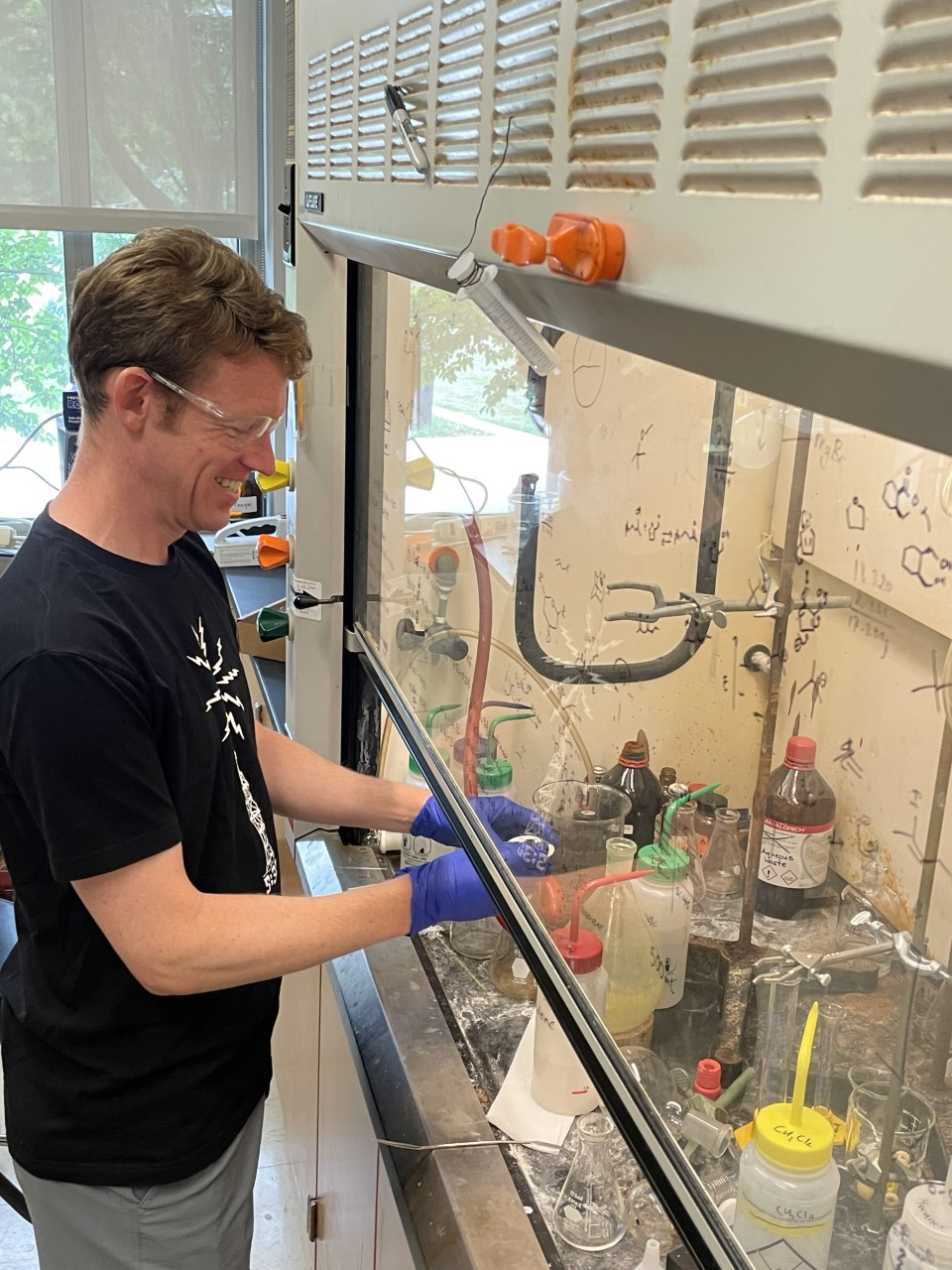