Dr. Good, my partner Anh, and I usually start to come in around 9 everyday. We will get settled and ready for the day while Dr. Good checks his email. We get the laser and the plasma chamber up and running if they aren’t already, so we are ready to roll into experiments when we want to. In fact, the laser doesn’t always run the same way daily, even if we do not make any changes to it. A realignment of the dye laser cavity is needed to get our experiment running for most parts. If there is some down time, there is usually a little bit of reading to do. Most of the time it’s textbooks or manuals of the machines that we are using.

Around 10 we start to get our work for the day going. Right now, research has proven to be very day to day. There is a decent bit of maintenance to be done with parts of the plasma chamber and dye laser that we work with, so we could be doing that all morning. There are also a number of things we can do with the dye laser to familiarize ourselves with it. Working with the dye laser is very tedious, as there are many mirrors and lenses that have to be carefully aligned in order for it to operate. Most recently, we have been messing with the alignment of the dye laser, and then practicing realigning. If these activities are being done, there is more reading to do. 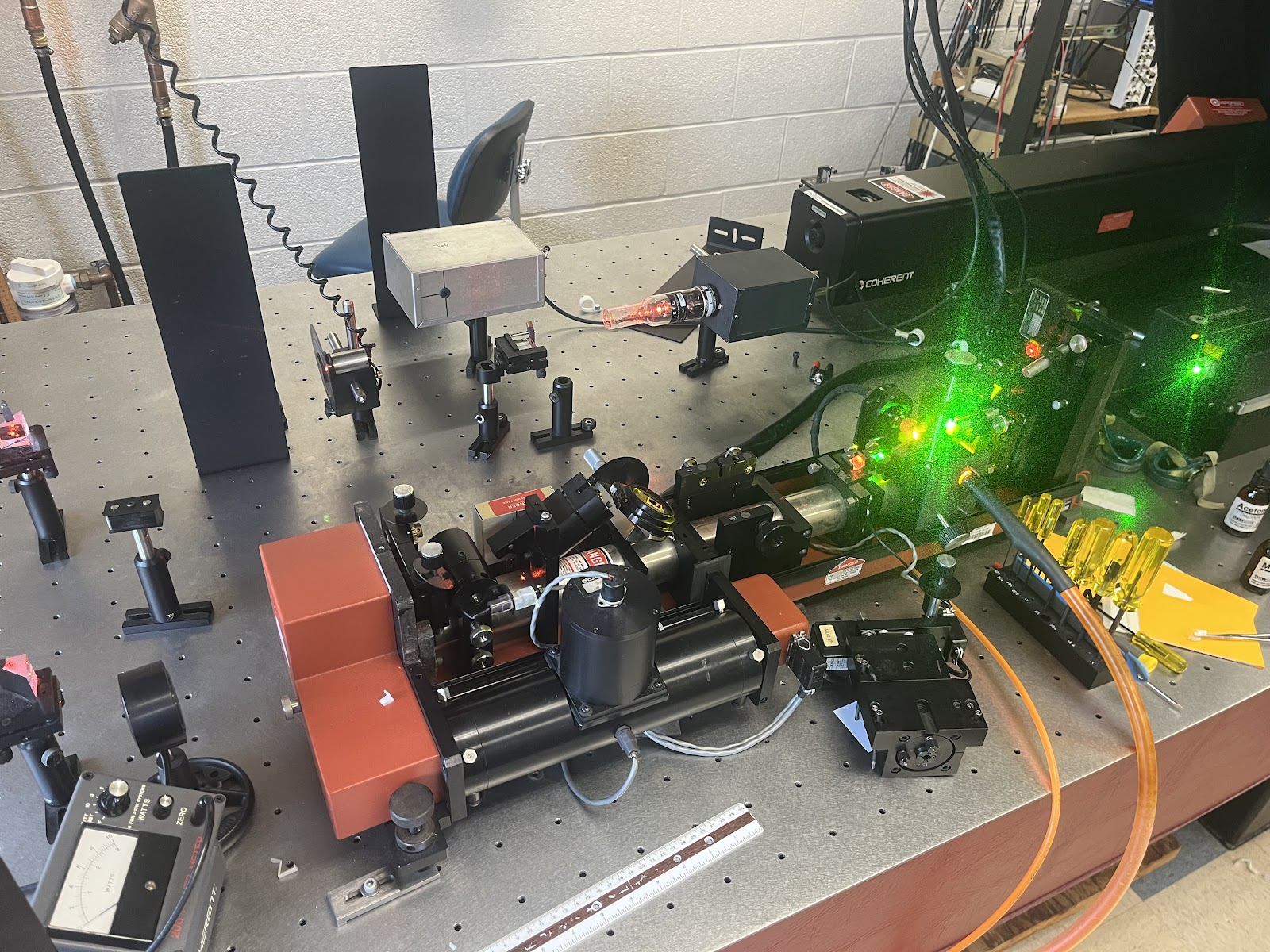 Image of the dye laser

We all take an hour lunch break at 12:00 everyday.

At 1 we get back to work and continue what we started in the morning, whether that be maintenance, more trials and experiments, or more ready. Most recently, we have run a trial to get some voltage data while studying laser induced fluorescence. We have aligned our laser to go through a tube filled with gas, and then connected a photo detector to a computer where we are running a logger pro graph of the voltage.

Our project is to use laser-induced fluorescence (LIF) to diagnose ion-acoustic waves – a phenomenon happens in plasma physics. Plasma is known as the fourth state of matter, which consists of an ionized gas (typically Argon). We use a Langmuir probe to study the characteristics of plasma at different spatial positions. We create plasma in a magnetic-confined chamber, by applying voltage to an incandescent filament that launches electrons to collide with gas atoms and ionize them. Our device consists of two such setups, divided into a source and a target chamber. Ion-acoustic waves are created in the low frequency regime, and it is known to be a collisionless wave (no particle physical interactions needed to create perturbation, but just Coulomb forces). We fluctuate the source chamber voltage in the positive regime and ground the target chamber so particles can flow from source to target chamber. There is a negatively-biased grid in the middle to keep the electrons from going through, which leaves only a net flow of ions. We would then shine a laser to the waves and use the re-emitted light from it to study the wave’ speed distribution, due to Doppler broadening. Basically, when a photon from the laser beam hits a particle, that particle is excited to higher energy states, and quickly decays and emits a photon with longer wavelength (the re-emitted light).

Previous experiments involved changing the Langmuir probe’s positions manually. However, after intensive research (the stepping motor is a relatively old device which is not well-supported anymore), we have installed software and drivers that enabled connections between our computer and the motor. And now just with simple commands, we can bring the probe to whichever position we want, making the process of acquiring plasma data much more convenient. 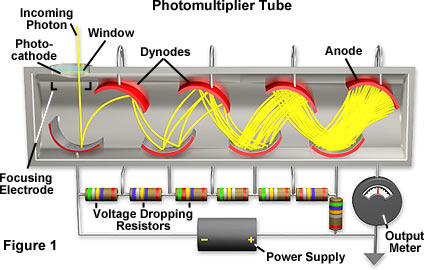 My current task has been to make a power supply box for the photomultiplier (PMT) tube. The PMT tube simply reads light signals (photons) and gives a voltage output proportional to the number of photons coming in. This is done by the multiplication of electrons when they hit the dynodes (Figure 1). Each subsequent dynode has a more negative potential to attract the electrons. A series of dynodes eventually draw all of the electrons to follow a zigzag pattern. I have modified the output of our PMT tube to have a BNC connection, so we can easily monitor it on an oscilloscope. I am also installing PMT signal connections to the power supply, as well as making a potential meter (just a knob) that modulates the voltage that comes in the PMT tube. Previous student researchers already made one, but we want to make a new portable supply that can be brought to anywhere! In this experiment, the PMT is useful in studying the ion-acoustic wave through reading the light emitted from the ion waves that were excited by the laser beam. PMT (in a box to trap lights in)